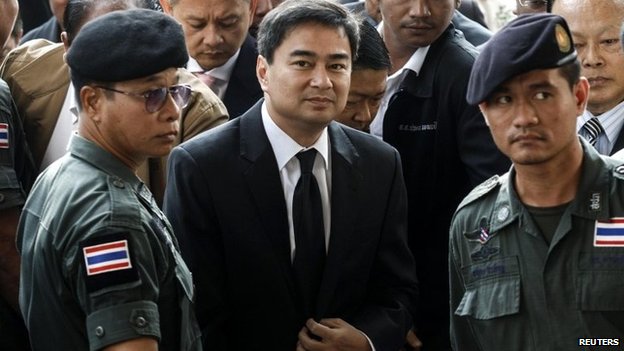 A Thai court has dismissed murder charges against former Prime Minister Abhisit Vejjajiva linked to a bloody crackdown on protesters in 2010.

In the end the military moved to end the stand-off. Over 90 people, mostly civilians, died during the protests.

Mr Abhisit was charged under the previous government, which has since been ousted in a military coup.

The 2010 protesters supported Thaksin Shinawatra, the prime minister removed by the military in 2006.

It was under his sister, Yingluck, that proceedings were brought against Mr Abhisit.

However, Ms Yingluck’s government – elected in 2011 – was removed in a military coup in May 2014. Earlier this month coup leader Gen Prayuth Chan-ocha was named prime minister.

The 2010 protests, which took place between early March and mid-May, saw key parts of Bangkok shut down by a “red-shirt” occupation.

There were several clashes and outbreaks of violence, culminating in the military operation to clear the protesters on 19 May.

Prosecutors said Mr Abhisit and his deputy prime minister at the time, Suthep Thaugsuban, were responsible for authorising the use of live fire against protesters. Both men rejected the charges.

The Criminal Court ruled that it could not hear the case because the two men had held public office at the time and were acting under an emergency decree.

It said only the Supreme Court could assess the case. Thailand’s anti-corruption body was examining the case against the two men, which it could send on to the Supreme Court, local reports said.

It was Mr Suthep who spearheaded the protests that led to the most recent military coup. Protesters blockaded government buildings in a six-month campaign to bring down Ms Yingluck’s government.

Dozens of people died and in February the military took power in a move it said was aimed at restoring stability.

Thailand has been embroiled in political turmoil since the removal of Mr Thaksin in 2006.

The telecommunications billionaire enjoyed huge support from mainly poor rural voters who were aided by his policies.

Parties allied to Mr Thaksin have been elected in all the elections since the 2006 coup, however, because of his strong rural support base, leaving Thailand locked in a cycle of unrest.