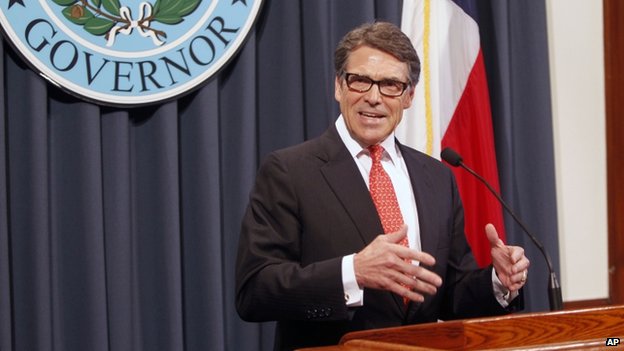 The governor of the US state of Texas, Rick Perry, has vowed to fight an indictment against him for abuse of power, which he dismissed as a farce

It amounts to nothing more than an abuse of power… I cannot and will not allow that to happen, Mr Perry said.

He faces two counts of abuse of power and coercion over a funding veto he imposed last year, seen as a bid to force a local prosecutor to resign.

The possible Republican presidential hopeful has denied any wrong-doing.

A grand jury indicted Governor Perry on Friday after months of investigation into his motivations for cutting funds amounting to $7.5 million (£4.5 million) to a state anti-corruption unit run by District Attorney Rosemary Lehmberg.

But the governor defended his decision on Saturday, saying he had exercised this authority to veto funding for an office whose leadership had lost the public’s confidence by acting inappropriately and unethically

I wholeheartedly and unequivocally stand behind my veto, and I’ll continue to defend this lawful action of my executive authority as governor.

I intend to fight against those who would erode our state’s constitution and laws, purely for political purposes, and I intend to win,” Governor Perry told reporters.

Governor Perry, 63, is the longest-serving governor in the state’s history and Texas’s first indicted governor in nearly a century.

• 1984: Entered political life when elected to the Texas House of Representatives as a Democrat

• 2013: Announces retirement from the governor’s position

• 2014: Indicted by grand jury on charges of abuse of power

The Texans for Public Justice, which filed a complaint in the case, said the grand jury decided Perry’s bullying crossed the line into law breaking

Abuse of office can carry punishments of between five to 99 years in prison, while coercion of a public servant carries sentences ranging from two to 10 years

His recent movements between key Republican battleground states is seen by analysts as laying the groundwork for a possible presidential run in 2016.

Mr Perry announced that he would retire from the Texas governor’s office instead of seeking a fourth term in July 2013.