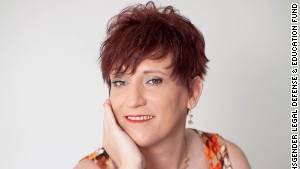 (CNN) — With its long lines and seemingly endless paperwork, a trip to the Department of Motor Vehicles can rarely be classified as fun. But it could be worse.

Two West Virginia transgender women claim their recent DMV visits were especially harrowing as they attempted to update their names and change their driver’s license photos.

In separate incidents, both recount officials telling them their appearance looked too feminine for a driver’s license issued to a male and that they would have to dress down for their photos.

“(A manager) told me it was a DMV policy that people listed as male could not wear makeup,” said Kristen Skinner. “The manager referred to me as ‘it’ and told me to take off my makeup, wig and fake eyelashes.”

Skinner, whose hair and eyelashes were her own and not fake, eventually took the license photo after removing all facial makeup.

The 45-year-old IT professional called the experience at the Charles Town office in Jefferson County on January 7 “humiliating.”

“The way I was treated was unprofessional,” Skinner said. “Isn’t the point of a photo identification to identify how you look every day?”

Trudy Kitzmiller said she had a similar experience many months later in neighboring Berkeley County. According to her, after showing all the legal paperwork to change her name on her driver’s license, DMV workers in Martinsburg demanded she remove all makeup, jewelry and long hair.

“It doesn’t matter whether my license says M or F. I’m still a transgendered woman, and they shouldn’t tell me how to dress or appear,” Kitzmiller said.

“I don’t know many transgender women in this state, but it (should have) never happened that way. I am a human being and should be treated as a human being.”

Kitzmiller refused to change her physical appearance and left the DMV on May 10 without a new driver’s license.

In an interview with CNN, Steve Dale, acting commissioner of West Virginia’s Department of Motor Vehicles, renounced any remarks that made individuals feel uncomfortable.

“I do not condone or approve any conduct which embarrassed an applicant or would single an applicant out,” he said, adding the department is investigating the women’s claims of verbal humiliation.

However, Dale emphasized he believes proper protocol was followed.

Under West Virginia law, Dale said, a photo that deviates from gender listed on the license falls under an “attempt to conceal or alter your identity or appearance.”

“It would be the same as if you wanted to take a driver’s license picture with a scarf over your face or if you we were wearing some type of garb that conceals your identity,” he said. “And the decision is a subjective one that is handed down by the customer service representative, and then is subject to appeal by the manager and then it could come all the way up to me, the commissioner.”

Dale recommends each woman receive a court-ordered statement that indicates they have transitioned genders.

Then, and only then, can their photo appearance “match” their listed driver’s license gender. Kitzmiller and Skinner are listed as men on their licences.

“Normally, if a customer comes in with the court order designating a gender change, it is handled discreetly at the local office and the information is changed,” Dale said. “The customer leaves the office with what the circuit court judge has directed and the issue does not reach my desk.”

However, according to both women and the Transgender Legal Defense & Education Fund, a court-ordered gender change may not be that easy.

In most cases, the court requires medical action to issue the order, which some transgender people are uncomfortable with or simply cannot afford. Skinner said cost is an issue for her.

Michael Silverman, the executive director of the Transgender Fund, elaborated on the cost issue.

“To get your gender changed under the West Virginia license, one must perform a certain surgery. And for many people, this is not possible,” he said. “And whether that’s because of discriminatory insurance that does not recognize this or through other means should not matter.”

Silverman disagreed with the DMV’s characterization that makeup, long hair and even eyelashes can equate to attempting to conceal an identity.

“Trudy and Kristen have struggled to become who they are, and they are finally open and honest now in presenting the women they truly are,” he said.

“This is how their friends, family, co-workers and community know them, and the DMV cannot tell them they have to hide their true identities as transgender women.”

Dale told CNN that he believes many other states have similar policies and that the West Virginia DMV has no plans to change its protocol.

However, he stressed that if their internal review finds any customer service representative or manager treated the women with disrespect, his office would issue a swift apology.

“We want all our applicants to be treated with respect no matter their gender choices, race or creed.”

Regardless of the outcome of the review, Kitzmiller says she is struggling to find steady work without a valid ID card.

She has worked as a heavy-machine operator.

“Employers will not hire me because my union card and everything else shows me as Trudy,” she said. “My union brothers and sisters treated me great. I was so surprised to see how I was treated by government employees.”